Humor As An Art Key
via Herb

"The lie can be maintained only for such time as the State can shield the people from the political, economic and/or military consequences of the lie. It thus becomes vitally important for the State to use all of its powers to repress dissent, for the truth is the mortal enemy of the lie, and thus by extension, the truth becomes the greatest enemy of the State." Dr. Joseph M. Goebbels

BEFORE YOU GET ANGRY, READ THE DISCLAIMER NOW

The bible warns Satan's demons take on the image of God, similar to that done in Eden, (How else do they gain control of earth?): II Corinthians, 11:14

Satan himself is transformed into an angel of light.

His ministers also be transformed as the ministers of righteousness; whose end shall be according to their works.

Michael Dutton Douglas (November 16, 1945 - November 6, 1963) was a 17-year-old acquaintance of First Lady Laura Bush (then Laura Welch) who was killed when Welch, also 17, failed to stop at a stop sign while driving and broadsided his vehicle. Welch was not ticketed or charged in connection with the collision. According to some accounts, Douglas was a former romantic interest or ex-boyfriend of Welch.

Douglas and Welch were students together at Robert E. Lee High School in Midland, Texas. Douglas has been described as an active athlete, physically attractive, and intelligent. He was nominated as the school's most popular male student while a junior, an honor typically awarded only to graduating high school seniors.

In May 2000, a two-page police report detailing the fatal crash was made public. The report revealed that on November 6, 1963, Welch was driving her Chevrolet Impala sedan with one passenger (Judy Dyke, also 17). It was a clear Wednesday night, shortly after 8 p.m., when Welch entered the intersection of State Highway 349 and Farm to Market Road 868. Welch failed to observe the intersection's stop sign and collided into Douglas' Chevrolet Corvair sedan. Welch and Dyke sustained minor injuries; Douglas was pronounced dead on arrival at Midland Memorial Hospital. Welch was not charged with any offense. 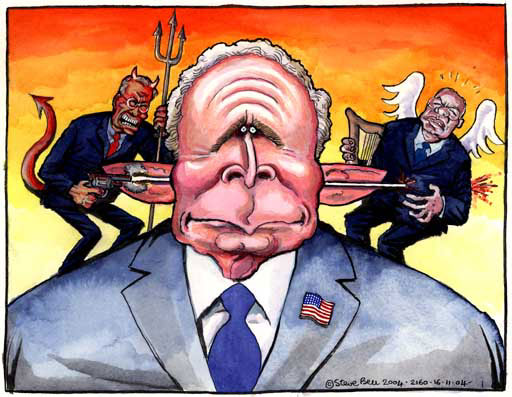 If you have a high speed connection, like Science (sic) Faction, and have a good imagination that will allow 'upgrading names and events' on the fly, Then you may enjoy listening to this MP3 a few times:

I would move heaven and earth to protect my husb..errr.. President Bush!
Condoleezza Rice

A pressing issue of dinner-party etiquette is vexing Washington, according to a story now making the D.C. rounds: How should you react when your guest, in this case national-security adviser Condoleezza Rice, makes a poignant faux pas? At a recent dinner party hosted by New York Times D.C. bureau chief Philip Taubman and his wife, Times reporter Felicity Barringer, and attended by Arthur Sulzberger Jr., Maureen Dowd, Steven Weisman, and Elisabeth Bumiller, Rice was reportedly overheard saying, "As I was telling my husb---" and then stopping herself abruptly, before saying, "As I was telling President Bush."

MY NAME IS LUCIFER, PLEASE TAKE MY HAND!"

"The thing about Ozzy is, he's made a lot of big hit recordings,. 'Party With the Animals,' 'Sabbath Bloody Sabbath,' 'Facing Hell,' 'Black Skies' and 'Bloodbath in Paradise.' Ozzy, Mom loves your stuff." George W. Bush - May 4, 2002

The Antichrist is variously understood as being a consummately evil system of government or leader.

The Antichrist will be a leader who deceives many people.

The Antichrist will divide the world and create war without end.

The Antichrist will declare that things which are evil to be good.

The Antichrist will refer to war as peace, death as a solution for justice, and serving the wealthy as a means of helping the poor.

Many nations will recognize that he is evil, but his own people will be inclined to believe his deceptions. 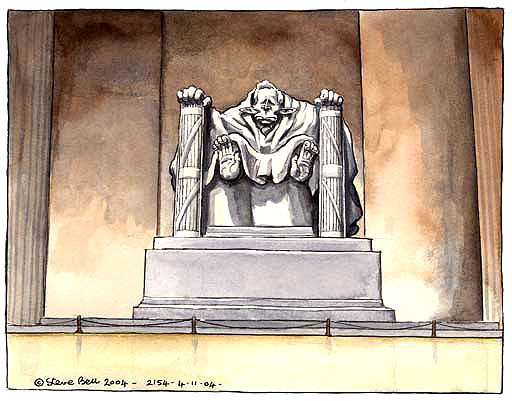 GOD said, "thou shall not kill" and JESUS extended this concept when he said,

Hatred which is the same as murder is unforgiving, vengeful and hostile towards one's enemies" (1 John 3:15) 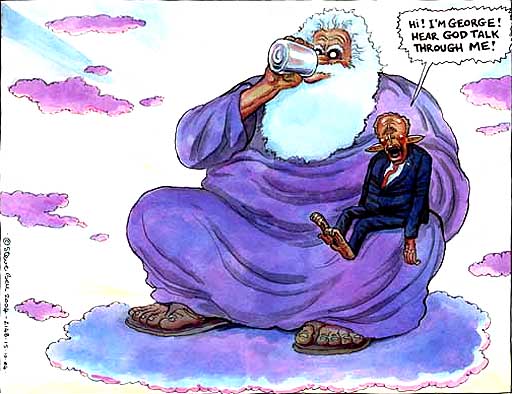 "God told me to strike at al Qaida and I struck them, and then he instructed me to strike at Saddam, which I did, and now I am determined to solve the problem in the Middle East. If you help me I will act, and if not, the elections will come and I will have to focus on them." - George W. Bush - [click - HAARETZ.COM - to read article]

Watchman on the Wall

George W. Bush Never Said Publicly, "Jesus Christ Is MY Lord"; he replaces MY with the, and when given several public forums, where he [Temporary] could have denounced his demonic affiliation with Skull & Bones, he confirms his hypocrisy by saying "It's so secret we can't talk about it."

Russert: You were both [Kerry & Bush] in Skull and Bones, the secret society.

President Bush: It's so secret we can't talk about it.

Russert: What does that mean for America? The conspiracy theorists are going to go wild.

President Bush: I'm sure they are. I don’t know. I haven't seen Web pages yet. (Laughs)

'My heritage is part of who I am'

TIME: But you sure shared a lot of the same upbringing: Andover, Yale, even Skull and Bones. Did you have any qualms, say, about joining an elite secret club like Bones?

Bush: No qualms at all. I was honored. I was fairly nonchalant. I didn't view it as a great heritage thing. I didn't take it all that seriously.

TIME: Demystify it a bit for those who might think it's a cross between a Masonic Lodge and the Trilateral Commission. Did your father show up for your initiation, like your grandfather showed up for his?

Bush: Without revealing all the great secrets? I got a few of my old club mates who could demystify it right off the bat. My dad didn't tap me. Someone a year ahead of me tapped me. There was an entry celebration. I can't remember whether my dad showed up or not. I don't think so.

"The Bush administration deliberately, not inadvertently, helped to arm Iraq by allowing U.S. technology to be shipped to Iraqi military and to Iraqi defense factories," Gonzalez said. "Throughout the course of the Bush administration, U.S. and foreign firms were granted export licenses to ship U.S. technology directly to Iraqi weapons facilities despite ample evidence showing that these factories were producing weapons." - Henry Gonzalez, July 27, 1992

"The president misled Congress and the public about the role U.S. firms played in arming Iraq." - Speech on the floor of the House of Representatives, House Banking Committee chair Henry Gonzalez

The Mark of the Beast

A company in Ohio called City-Watcher has implanted radio transmitters into the arms of two of its workers. The implants ensure that only they can enter the strongroom. Apparently it is "the first known case in which US workers have been tagged electronically as a way of identifying them". Continue Reading at:

Ministers of Satan Watch
continued, ...but it did not stop there and continues today!